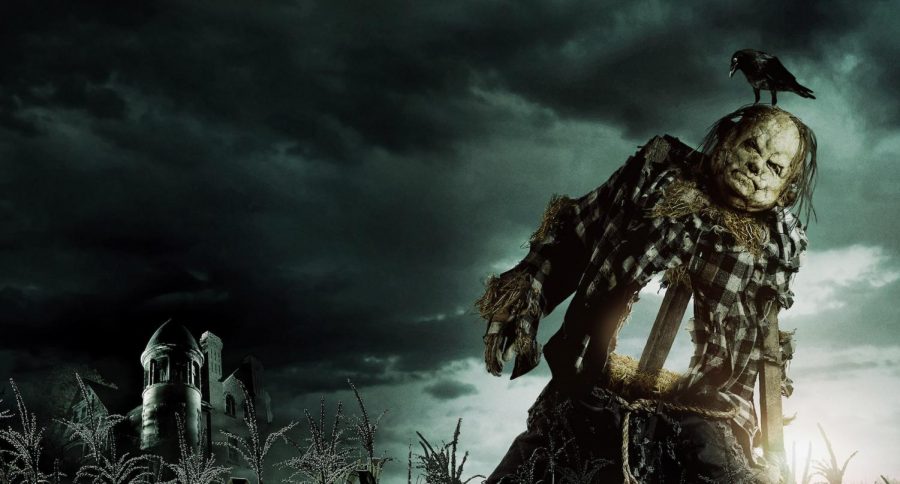 Halloween time is the perfect time to read some scary stories. There is a great book called  Scary Stories to Tell in the Dark that is perfect even for the student who doesn’t like to read much. There are a lot of stories in the book that you can quickly read and get that spooky feeling!  To give you a little peek into the book, here is a story called ¨Harold the Scarecrow.” I picked this story because it starts off pretty normal; a lot of farmers have scarecrows. However, there was a twist in the story, and that’s when it gets scary!
¨Harold the Scarecrow¨ 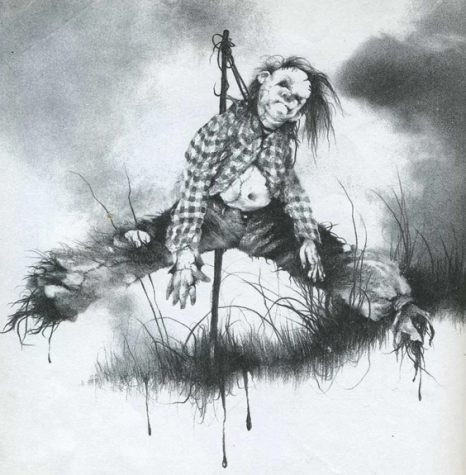 When it got hot in the valley, Thomas and Alfred drove their cows up to a cool, green pasture in the mountains to graze. Usually they stayed there with the cows for two months. Then they brought them down to the valley again. The work was easy enough, but, oh, it was boring. All day the two men tended their cows. At night they went back to the tiny hut where they lived. They ate supper and worked in the garden and went to sleep. It was always the same.

Then Thomas had an idea that changed everything. “Let’s make a doll the size of a man.” he said. “It would be fun to make, and we could put it in the garden to scare the birds.”

“It should look like Harold,” Alfred said. Harold was a farmer they both hated. They made a doll out of old sacks stuffed with straw. They gave it a pointy nose like Harold’s and tiny eyes like his. Then they added dark hair and a twisted frown. Of course they also gave it Harold’s name.

Each morning on their way to the pasture, they tied Harold to a pole in the garden to scare away the birds. Each night they brought him inside so that he wouldn’t get ruined if it rained.

When they were feeling playful, they would talk to him. One of them might say, “How are the vegetables growing today, Harold?” Then the other, making believe he was Harold, would answer in a crazy voice, “Very slowly.” They both would laugh, but not Harold.

Whenever something went wrong, they took it out on Harold. They would curse at him, even kick or punch him. Sometimes one of them would take the food they were eating (which they both were sick of) and smear it on the doll’s face. “How do you like that stew, Harold?” he would ask. “Well, you better eat it – or else.” Then the two men would howl with laughter.

One night, after Thomas had wiped Harold’s face with food, Harold grunted. “Did you hear that?” Alfred asked.

“It was Harold,” Thomas said. “I was watching him when it happened. I can’t believe it.”

“How could he grunt?” Alfred asked, “He’s just a sack of straw. It’s not possible.”

“Let’s throw him in the fire,” Thomas said, “and that will be that.”

“Let’s not do anything stupid,” said Alfred. “We don’t know what’s going on. When we move the cows down, we’ll leave him behind. For now, let’s just keep an eye on him.”

So they left Harold sitting in the corner of the hut. They didn’t talk to him or take him outside anymore. Now and then the doll grunted, but that was all. After a few days, they decided there was nothing to be afraid of. Maybe a mouse or some insects had gotten inside Harold and were making those sounds.

So Thomas and Alfred went back to their old ways. Each morning they put Harold out in the garden, and each night they brought him back into the hut. When they felt playful, they joked with him. When they felt mean, they treated him as badly as ever.

Then one night Alfred noticed something that frightened him. “Harold is growing,” he said.

“I was thinking the same thing.” Thomas said.

“Maybe it’s just our imagination,” Alfred replied. “We have been up here on this mountain for too long.”

The next morning, while they were eating, Harold stood up and walked out of the hut. He climbed up on the roof and trotted back and forth, like a horse on its hind legs. All day and all night, he trotted like that. In the morning Harold climbed down and stood in a far corner of the pasture. The men had no idea what he would do next. They were afraid.

They decided to take the cows down into the valley that same day. When they left, Harold was nowhere in sight. They felt as if they had escaped a great danger and began joking and singing. But when they had gone only a mile or two, they realized they had forgotten to bring the milking stools.

Neither one wanted to go back for them, but the stools would cost a lot to replace. “There really is nothing to be afraid of,” they told one another. “After all, what could a doll do?”

They drew straws to see which one would go back. It was Thomas. “I’ll catch up with you.” he said, and Alfred walked toward the valley.

When Alfred came to a rise in the path, he looked back for Thomas. He did not see him anywhere. But he did see Harold. The doll was on the roof of the hut again. As Alfred watched, Harold kneeled and stretched out a bloody skin to dry in the sun.
Did you like it? If you did, you should check out the movie version where all these stories are brought to life. This story is one of the many stories included! So if you like this story, try writing your own ending. You decide what happens to Harold and Alfred next.