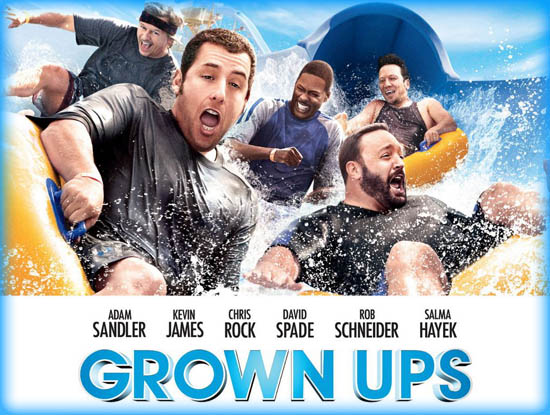 One of the best comedy/feelgood movies of all time is definitely the movie Grown Ups. Basically, everthing about this movie is fantastic, such as the plot, humorous moments, and the cast (Adam Sandler, Kevin James, Chris Rock, David Spade, and Rob Schneider). If you have not seen this movie, I recommend you stop reading here due to the fact there are major spoilers in this article, so maybe watch the movie if you have not already before continuing.

The movie is about a group of friends that used to play basketball together who, 30 years later, have drifted apart, but are reunited when their beloved coach passes away. They then return to the beautiful lake house they were at after their victory back in ’78 with their kids. They end up jumping off ropes into lakes, skipping rocks, going to a water park, and more. On July 4th, they decide to rematch the people that complained that they should not have won back in that game they played, and the main character Lenny Feder (played by Adam Sandler) purposely loses the match, and grows a strong bond with his oldest son. The movie also really ends on a good note.

So to wrap it up, this movie was amazing. The cast, plot, setting, story-line, and everything was perfectly made. Even the sequel was good, and there are not too many good sequels out there!

What did you think of the movie? Comment what other movies you think I should review!