2nd Place in the District Tournament 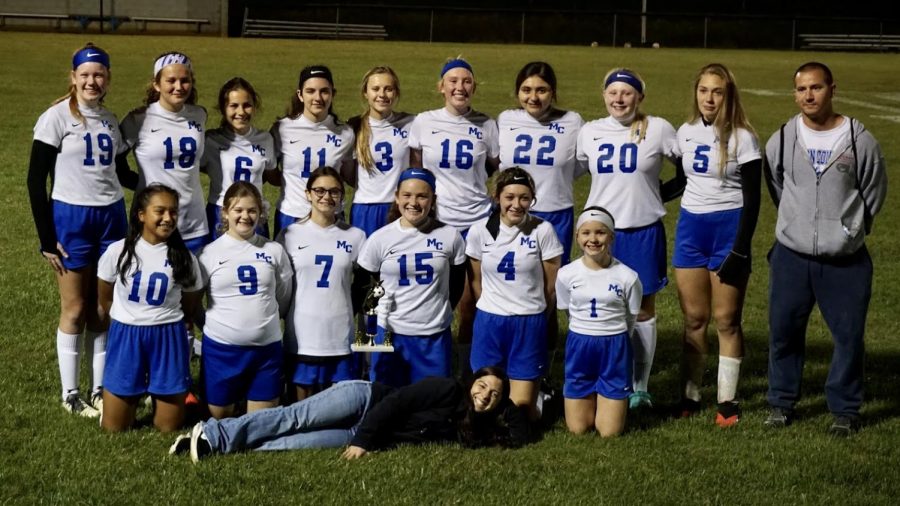 The Macon County Junior High School’s girls soccer team had a great season this year! They are also so thankful that they had a full season without anyone having to be sick or quarantined.

During the regular season the girls had 7 wins, 1 tie, and 1 loss. They played in the semi-final game, and they won 6-0 against DeKalb (who they had tied earlier in the season). This win allowed them to move onto the championship against Livingston (the team that beat them the first game of the season and were also undefeated). Thursday, October 1st, 2020, early in the second half, the girls scored from a corner kick. With less than 10 minutes in the second Livingston scored which means it was tied 1-1, but then with seconds left in second half, Livingston scored another goal to win the championship game.

Although the ladies wanted to walk away with the championship trophy, second place is nothing to be ashamed about. Last year at this time they had finished 4th and went home with nothing, but this year they have improved and put in so much effort that they walked away with a trophy and heads high. In some games, the girls one by mercy rule, barely won, tied, and lost, but these girls never gave up on themselves and kept fighting through all the pain and struggles that came their way.

With only 15 players on our team (11 on the field at once) many teams had nearly double the amount of our players, which means they only had 4 players sitting on the bench for most games. They had to hope nobody would be quarantined or get hurt since they would be forced to forfeit if there were less than 11 players. Luckily, nobody got hurt throughout the season, and the girls weren’t forced to do that. Another disadvantage of not having many players is that most of them stayed on the field for the entire game which means they had to put up more of a fight than teams that had subs going in every few minutes.

The whole soccer team would like to thank Coach Jessica and Jason Leftrick for being amazing coaches this season. They always made us work hard for what we wanted even if we didn’t want to do the work. We always had fun during practices even when we were supposed to be serious. Even though we didn’t want to do running or certain drills most of the time and we complained about it, we are thankful that you made us do it for it made us better players and we probably wouldn’t have gotten as far as we did this year without it.

The MCJH should definitely be proud of their season along with their placement in districts. They are the first MCJH girl’s soccer team to make second place in the district tournament.